Executive Chef Miho Tanaka is an uniquely talented chef who has developed her skills in creating soul-touching, delicious Japanese cuisine. Her passion for creating dishes which speak to your heart is her daily objective. Over the past 10 years she has served as a sushi chef at Japanese restaurants including Izakaya Amu, Matsuhisa Vail, Sushi Tora, Sushi Leo, Sushi Yoshi, 95a Sushi, and many more in all over Boulder County.

Miho was originally born and raised in Shizuoka, Japan.  At 18, she moved to California to earn her Masters in Music and to explore fine cuisine. Miho currently lives and works in Boulder, Colorado where she works as a professional Japanese chef, caterer, and cultural consultant.

Miho’s passion for food began when she was young under an influence of her mother’s exceptional cooking skills, Miho grew up eating and seeing her mom creates many dishes everyday on their table, she started to help her mom prepare meals.

When Miho was in college, she worked at college’s biggest kitchen as a bakery manager where she baked and occasional lead cook for sushi dinner for students.  She managed to make hundreds of rolls and it was a big hit every time.  This was an interesting sushi experience prior to her sushi chef career started in Colorado.

After the college, Miho moved to Boulder, CO seeking a job and ended up working as an apprentice at local sushi restaurant where you learned the basics of sushi art. She kept moving up to different sushi restaurants to learn advanced skills on fish cutting, traditional sushi making skills from experienced sushi chefs, including Mori-san; most experienced knowledgeable sushi master in this area for over 30 years. His visions for sushi and his skills for Japanese cuisine had changed Miho’s world of cooking.  Instead of staying in the same restaurant, Miho learned many different new lessons and menus every time she took opportunities to move up.

After working in the restaurant business for many years, Miho decided to start her own business using all the useful skills she has leaned from many masters and restaurant experiences, called MihoCatering! 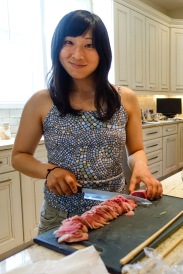